My palette system for Acrylics (and other water based media)

I wanted to let you know about my own palette system which I developed and use for acrylics. I've read a lot about (and tried) different palette systems (from tear-off palettes, stay-wet trays and sealed pots) over the years but nothing quite the same as this one.

As anyone who has tried acrylics knows a big problem is the speed of which acrylic paint dries, both on the painting surface but especially on the palette. Mixing colours and then finding them dry on the palette is no fun at all.

The most common way around this is the stay-wet palette, either a commercial version or a home-made one with a permeable membrane (baking paper) over a sponge/tissue. This works very well but has two main issues, After several days the palette can start to get mould on the sponge which ruins the paint, but even without this happening the paint on the palette becomes very watery as it soaks up so much water.

The system I've developed has different advantages and disadvantages:

Disadvantage: The paint still dries fast when painting (unlike a stay wet palette) so thin films of spread out mixes don't work, you need a good amount of paint in small areas to reduce the surface area and to keep evaporation down.
Advantage: It doesn't get mouldy and should keep paint wet for weeks/months and possibly even years.
Advantage: It lets the paint absorb some moisture between painting sessions, but not flooding the paint until it's too watery. This helps keep the paint fresh instead of just delaying the paint from drying out.


So how does it work?

The system is in two parts, a palette which is kept inside an air-tight box which contains quite a lot of water (containing preservative) at the bottom. A friend of mine has tried this with isopropyl alcohol in the water as a preservative. I used a product called Plantaserve P. There shouldn't be enough water that it can get into the paint when the palette is moved, but there should be enough that it will last for a very long time before evaporating from the air-tight box: 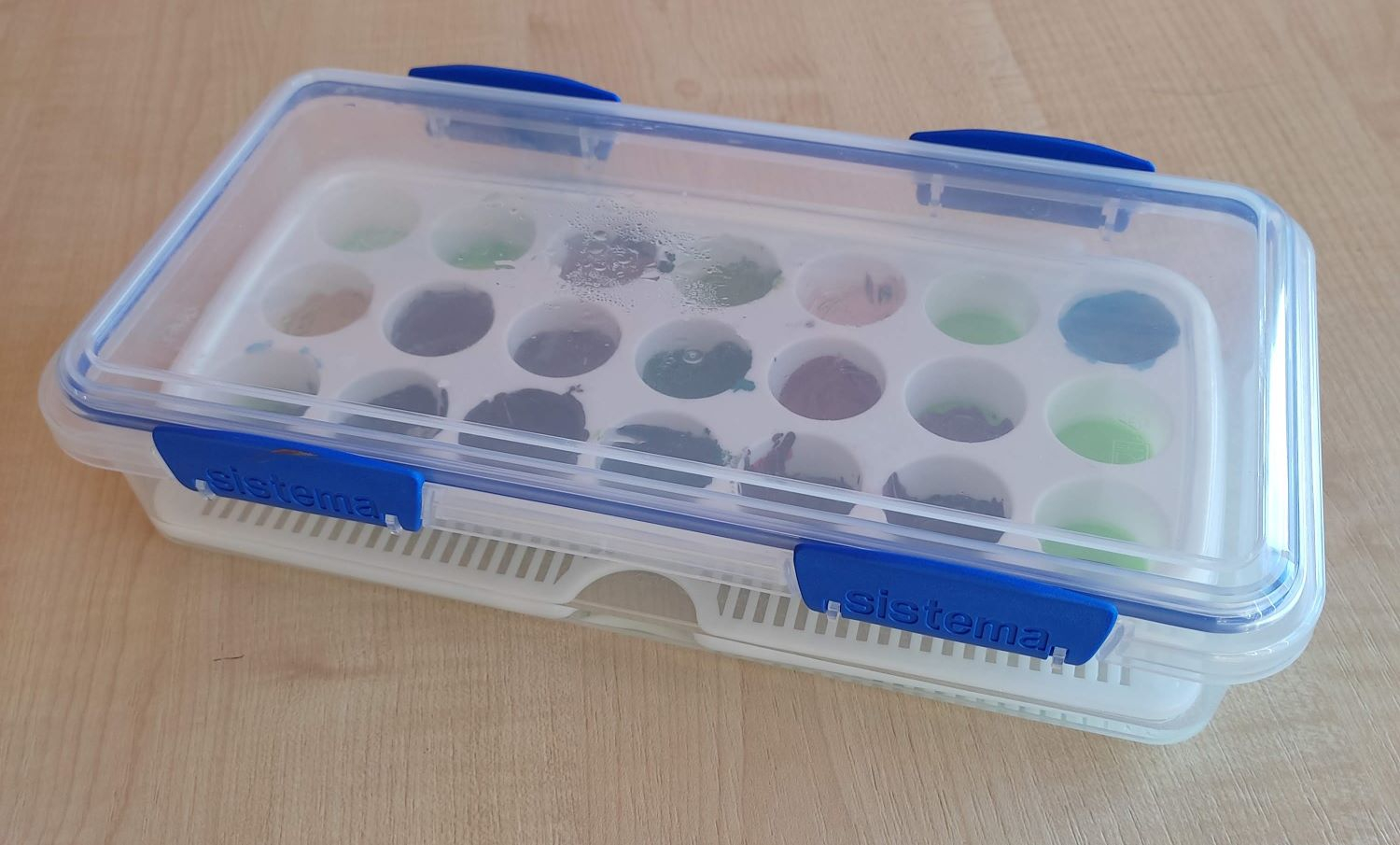 There is no sponge or tissue for mould/bacteria to grow on and the large amount of water keeps the interior totally humid – stopping the paint from drying out and it should last a very long time between sessions.

If we open up the box you can see it more clearly (I’ve used this palette for my latest painting): 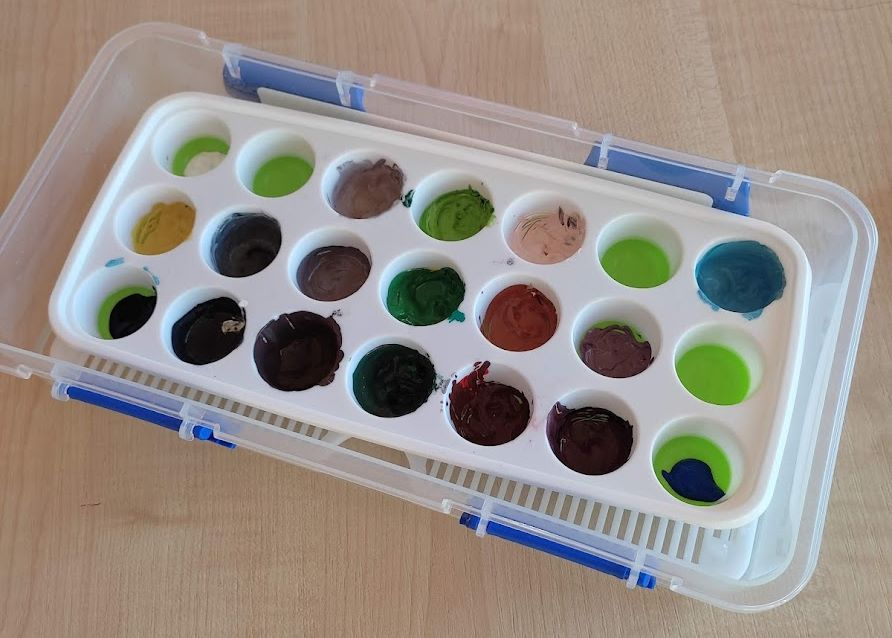 The palette is actually an ice cube tray (I got a set of 4 with lids). I like this design as there is space between the wells to stop paint cross-contamination, the wells are round and the bottoms are curved so no edges when mixing or cleaning. The curved bottom also reduces the tendency of paint to settle into a thin layer and dry quicker than a pile of paint with less surface area.

I tested the humidity of the system here and as you can see the air was completely saturated with water at 99%: 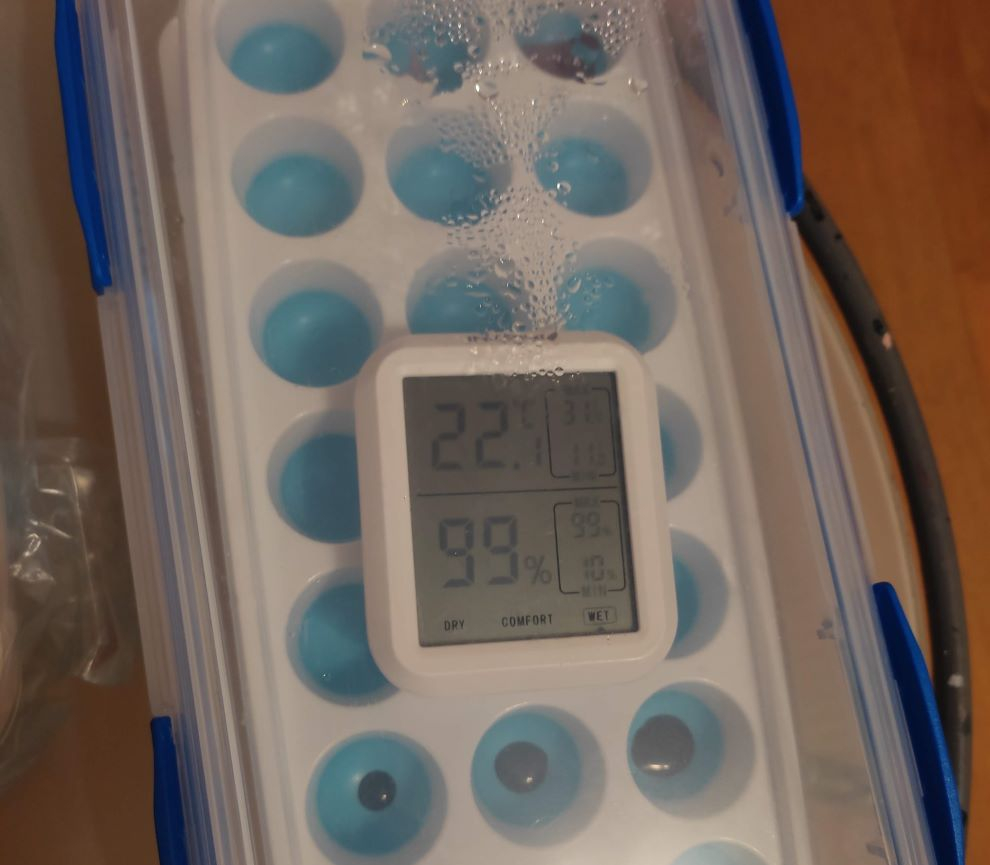 I tested putting one drop of water and three drops of different sizes of black acrylic paint in the wells in two palettes. One in this system and one in another palette (with a lid on) but not in the Tupperware with the sealed lid on.

It took 4 days and 3.5 hours for the drop of water to all but evaporate and the first acrylic blob to nearly set in the palette box without the Tupperware. The one contained within the Tupperware was unchanged after this time.

I then did the same test but with the lid off and with the palette in the box of water (also with the lid off), simulating the painting process. In this case it took 4 hours for the water to evaporate and the first blob to be almost dry. That is around 25 times faster. Still I think 4 hours is workable without adding water (though you’ll probably need to add more regularly).

The bottom of the wells are made of silicone which makes it flexible (for the ice cubes) but also lets vapour evaporate through it much more quickly than other plastics. If you used a solid plastic palette you probably would have longer time when stored, but over time (months) the water would slowly evaporate from the palette. With the water reservoir here there is so much water to replace that lost that it shouldn’t be a real issue.

When you finish painting you put the palette back into the Tupperware and close the lid and the water vapour will slowly fill the box, stopping any more evaporation and adding a small amount of water back into the acrylic paint (without flooding it with water like a stay wet palette).

A friend of mine has tried this with gouache and the paints stay fresh and workable after 2 days in the box so far, and acrylics for a week. We are still testing.. 😊