STUDIO LIGHTING AND THE USE OF A TABLET SCREEN AS REFERENCE. BEWARE! Get your lighting right first

tassieguy -
September 2021 edited September 2021 in Studio & Supplies
I made a giant blunder with the painting I’m presently working on. I decided to paint with my photo reference on my tablet screen and attach the tablet to my canvas just as I do with prints except that with the tablet I use magnets instead of Blu Tack. I paint in sections, drawing with the brush. To match colour/value I just dab paint on the screen’s protective cover. This had worked ok for me with a smaller painting, but I have not done it before with a large painting. The one I’m doing is 40” X 30”.  It’s a picture of the flank of the mountain here with a vast area of snow in the foreground. I started with the sky, then I did the middle-distance rocks and vegetation and, lastly, the snow in the foreground. I thought this painting was going to be a breeze because of the large areas of similar value/colour. But I had a lot of problems and am having to repaint most of the picture. It took me a while to figure out where I’d gone wrong.  I finally realized that the problems stem from my studio lighting which is in the ceiling and shines down at a 25⁰ angle onto the canvas. With a large canvas this means that the top gets a lot more light than the lower sections of the canvas. This is not a problem when I paint from prints because, for large paintings, I tile my photos and stick them onto the canvas next to the area I’m painting. This means that the tile and the relevant area of canvas get the same amount of light and so I can match value/colour accurately. But with the tablet it’s different. Unless you keep adjusting it, its screen is the same brightness wherever you position it on the canvas because it emits its own light.  I wasn't adjusting the brightness of the screen so I got the values all wrong in the lower two thirds of the painting and am having to repaint. As I was painting, I was worried that things didn’t look right but I thought I’d follow Mark’s advice and wait until I got the canvas covered before assessing what needed changing. That advice is good in almost all circumstances if you’re following his colour checking method from life or from a printed photo but, in this particular situation, it didn’t work.  I couldn’t figure out where I’d gone wrong, so I printed out the photo tiles and compared them with what I had painted from the tablet screen. Then it dawned on me.  There was nothing wrong with the tablet or my colour matching. It was the lighting. The tablet screen was as bright in the lower part of the canvas as in the upper part but the paint swatches I put on the screen were not. I tried to make them bright enough to match what I was seeing on the screen but couldn’t so I just got them as bright as I could.  But this didn’t work. No doubt a brighter spark than me would have quickly realized what was wrong but I’m not a photographer and it just didn’t occur to me that I would need to keep doing white balances and reduce the brightness of the screen as I moved lower down the canvas.   Or, I’d have to light my canvas evenly. It was hugely frustrating and annoying to have to repaint the whole picture, but lesson well learned. So, I’m investing in two studio lights on stands with 5300k dimmable LED lights. I’ll put one either side of the canvas so that the entire canvas is evenly lit.  I’m determined to get this tablet business sorted one way or the other so that I don’t have to keep paying ridiculous prices for ink cartridges and photo paper. And the colour on the screen is so much better than in printed photos.  I could just keep the tablet in one place on my work table but I want it on the canvas so I can see that each section I'm painting is looking the same as the reference in terms of form and value/colour. If it looks the same when I step back then I move onto the next section. But, unless you adjust the brightness of the screen, this only works if the light doesn't change between sections. So, the lesson is, if you are going to paint in sections from a tablet attached to your canvas make sure the canvas is evenly lit or, if your lighting is from above, you’ll have to keep adjusting the brightness of the screen and doing white balances every time you move it downwards. That’s too tedious and technical for this old luddite so I’ll get the studio lighting right instead. Unless I've got this all wrong and someone here is kind enough to enlighten me.

And please. don't tell me to paint from life instead of from photos. I do make colour notes on site but I'm too old to be standing out in the weather on top of snow covered mountains for two weeks which is how long my paintings typically take to complete. 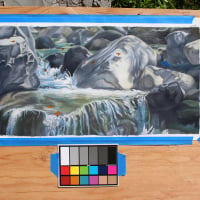