Bob_Aham -
July 2013 edited July 2013 in Drawing
On my last trip to the Met. I went through the Roman Greco art section. I was leaving as Sculpture is nice bit not really my thing when I passed this statue. 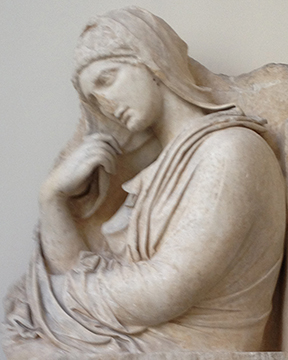 It was a funerary or grave marker for this woman. It was larger than life too. I thought it was creepy and depressing that someone would remove the equivalent of a head stone from someones grave. I was taken back by the beauty of the piece itself though. The veiling was exquisite and the expression so peaceful. It was in rough shape missing the nose and the eyes were kinda there. It looked as though it was made for a corner setting. I also thought it might make for a good subject for a painting even though it would really push my artistic abilities. I decided to sketch it in vine charcoal which I only used once before and it was a mess. I rubbed off half the sketch with my hand too. Live and learn. I know there are problems with the hand which I inked in and the face is a little different but it looks human. This is an epic achievement for me. For those of you that have an inate talent, appreciate your gift. I have to work extremely hard at it. I used the proportional dividers and only referenced a photo with a grid overlay for the final touches. I think I will paint this in layers as I tend to paint in spurts and it would be more conducive to my schedule. I just have to add a few ruffles to the inside of the arm and I will most likely work on the hand a little more too. 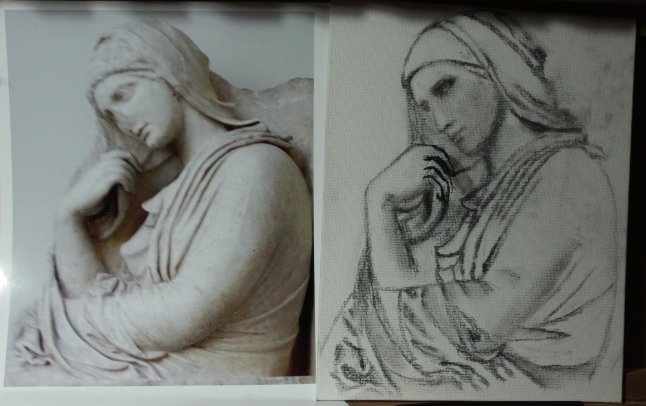