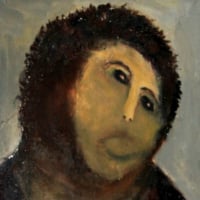 Dustin_Cropsboy -
February 2021 edited February 2021 in Studio & Supplies
I read that paint made with OMS could become underbound, meaning that the solvent washes the oil away from the pigment particles and leaves the pigment loose on the surface. Ron Francis said this would feel dry, but pigment would come off if rubbed with a rag because starting with such a wash creates a weaker paint film from the beginning.

Back at the beginning of December, I painted three panels with two coats of Geneva Foundation stain.  Tonight, I lightly rubbed the surface of each with a paper towel, and, sure enough, I saw the familiar brownish neutral there on my paper towel.

Is this normal?  (It's possible that I did not apply the foundation as micro-thin as Mark Carder recommends, but these two layers of stain have had two months to dry.)

And this leads me to a second question...  How do I know my Geneva Foundation is fatter than the white OP that Centurion used under my OMS-thinned stain layers?
0 · Share on Google+ Share on Twitter