tassieguy -
January 13 edited January 13 in General Discussion
It's been a bit quiet here lately so I thought I'd post this for discussion.

Do you struggle with the decision of whether to click the “like" or the “awesome” icon when commenting on work here at DMP?  I know I do at times. In some cases it’s easy because the painting really is awesome by any measure and I really like it. In other cases it's more difficult. Whilst one does not want to give false praise, if a painting posted here is not so good I sometimes still do give a "like" or an "awesome". Often, if a work was painted by a rank beginner and they’ve gotten a lot right then I will give a "like' or "awesome" to encourage them . I will also suggest improvements. So, not all works that I give a "like" or  "awesome" to are awesome by the standards I’d use to judge work by accomplished painters with many years of experience and even though I may not really like the subject or the colour or whatever I'll still click "like" if I think it's well done.

Do you think it is dishonest to take things such as how long a painter has been painting, experience, youth, age, disability etc. into consideration when deciding on what icon to award a painting? Or do you think it's ok to make adjustment for things like these? 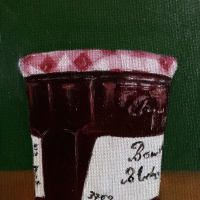