Caveat Emptor - The Secret Life of an American Art Forger

Just finished reading this great romp through the art market for forgeries over the last fifty years or so.
Highly recommended. 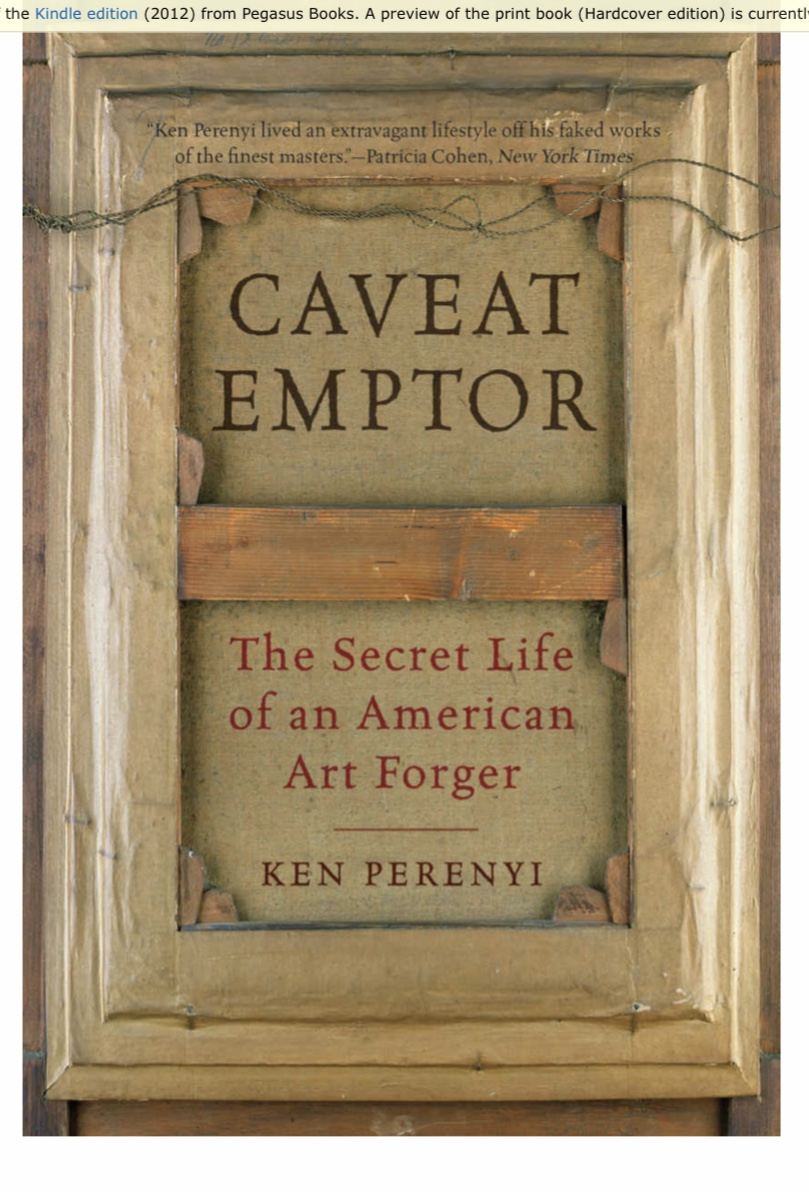 How much is "America's first and only great art forger," as the jacket copy describes the author, willing to reveal? Quite a lot, it seems. Perenyi, a graduate of a New Jersey technical school and a Vietnam draft dodger, fell in with a band of artistic New Yorkers and began imitating long-gone masters such as James E. Buttersworth and Martin Johnson Heade. The trick, he learned, was the peripheral details: the materials to which the canvas was fixed, the frame, a faux-aged stain. Perenyi took his canvases to New York antiques shops and specialty galleries, told a tale about a deceased uncle with treasures in his attic, and, more often than not, sold his wares. Some of his paintings reached the upper echelons of the art world and were brokered or bought by famous auction houses.

"I never told them the paintings were for real," Perenyi said to his lawyers in the 1990s, when he found himself at the center of an FBI investigation. "It wasn't my fault that Christie's, Phillips, Sotheby's and Bonhams sold them." The investigation abruptly ended (the book never makes clear precisely what happened, and the FBI file was marked "exempt from public disclosure," which may explain the absence of news related to the matter). There are, of course, many morally abhorrent moments in this story but it's hard not to like this surprisingly entertaining tale of the art world's shady side. Perenyi is culpable, but he may have had some help from the dealers and auction houses that looked the other way to make a buck.

A fabulous tale of impossible events. While my encounter with Ken Perenyi was fleeting, I long suspected he would claim his place in the dark arts of illustration and the fun of the chase. Enjoy the ride.--Richard Neville

An extraordinary memoir is to reveal how a gifted artist managed to forge his way to riches by conning high-profile auctioneers, dealers and collectors over four decades.

As Perenyi's exploits grow in value and range, the threat of being caught rises and the FBI draws near.

Perenyi illustrates how he became America's top art forger....Readers will be captivated as they follow the development of this remarkable talent over a 40-year career.

Born in 1949 in Hoboken, New Jersey, Ken Perenyi is a self-taught artist who painted his first pictures during the Summer of Love in 1967, having discovered an uncanny ability to intuitively grasp the aesthetic and technical aspects of the Old Masters. A series of fateful events resulted in what was to become a thirty-year career as a professional art forger. Today he operates his own studio in Madeira Beach, Florida.
...—-oooOooo—...
Enjoy