A couple of months ago we took a look at Ivan Shishkin's opinion of photo reference in his landscape painting. Now let's examine more about his specific working methods. 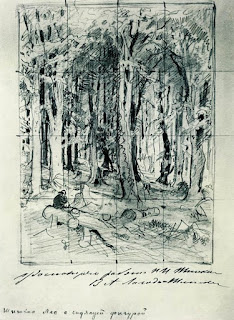 Preliminary Drawings
He would advise his students: "Before starting the painting, you have to do a sketch to clarify the idea and plan what you're going to be doing on a big canvas."

Note in the sketch at left, Shishkin draws a grid, probably to help him enlarge the composition onto the canvas.

Shishkin continues: "It's also important to do a preliminary drawing [on the canvas] with charcoal. Put a layer of charcoal on a clean canvas and wipe it with a dry tissue. You'll have a smooth base tone, and you can draw over that with more charcoal. You can erase off halftones and lights using an eraser made from a chunk of black bread. If you do that you will get the effect of lighting you need, and then you're ready to continue with the final painting." 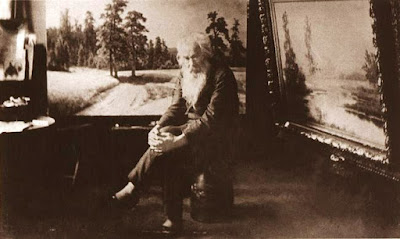 Paint and palette organization
"He carefully mixed organized groups of colors on his palette. All the colors must be prepared in groups in advance on the palette. He began by applying the darkest tones of paint. Then he proceeded to the halftones, and so on up to the light." (From a letter from Ivan Shishkin, St. Petersburg, 1896).

Shishkin studied in Düsseldorf, so it's not surprising that he used primarily German paints. "He used zinc whites for big studio paintings and lead whites during his traveling and for outdoor painting, because they dry more quickly. He painted on canvases from Dresden if he could."

"He used to buy a lot of different paints. But if he didn't know the specifications of a given kind of paint, such as lightfastness and durability, he avoided it."

"Because of this he completely stopped using carmine oil paint after [Vasily] Polenov showed him a chart of paints that was left in the sun for 10 years, and carmine completely disappeared."

Yellows:
Yellow ocher, cadmium yellows and oranges, zinc yellow (for backgrounds and leaves in the sunlight), raw sienna, chrome yellow (rarely), and Indian yellow (for glazing). He never used gamboge or aureolin. Sometimes he used Naples yellow for sand and roots. Occasionally for foreground textures he would mix fine sand into the paints.

Greens:
He used a lot of different ones, including: permanent green, cobalt green, chrome green, vermilion green, emerald green, and others.

Blacks:
Ivory black and lamp black oil paint.
-----
Many thanks to Samir Rakhmanov for translating the article in the Russian archives.
Previously: Ivan Shishkin's comments about photo reference