Shishkin and Photography by James Gurney

Although he was a devoted and prolific outdoor painter, Russian landscape painter Ivan Shishkin was also a big fan of photography, according to an article in the Russian archives.

He became closely involved with photos while working in Andrey Karelin's photography studio in 1870, coloring black and white photos for an album that was presented to emperor Alexander II.

Shishkin encouraged his students to work from photos, especially in the depths of winter, for example, when painting outdoors was impractical. Shishkin wrote in one of his letters:

"... Let me give you one major piece of advice, that underlies all of my painting secrets and techniques, and that advice is — photography. It is a mediator between the artist and nature and one of the most strict mentors you'll ever have. And if you understand the intelligent way of using it, you'll learn much faster and improve your weak points. You'll learn how to paint clouds, water, trees — everything. You'll better understand atmospheric effects and linear perspective and so on..."

Shishkin enlarged details with a magnifying glass, and he also used a projector. When he came to teach at the Academy of Fine Arts in 1897, he specifically mentioned the need for a "magic lantern" type projection device to aid in student learning, not only for enlarging photos, but for presenting drawings at a larger scale.

Although photographs were used widely by artists during his time, Shishkin was conscious of not mindlessly copying. He told his students that the way an artist uses a photo will reveal the artist with talent, because "a mediocre artist will slavishly copy all the unnecessary detail from photos, but a man with a flair will take only what he needs."

Shishkin's enthusiasm for modern tools like photography is not surprising during an era of technological innovation, and in an age of positivism, which placed a value on verifiable facts. His friend, portrait painter Ivan Kramskoi also used photography, and he probably used one to guide his portrait of Shishkin below:

But Shishkin never regarded photography as a substitute for painting outdoors from life. Kramskoi marveled at his productivity: "He paints two or three studies a day and completely finishes each of them."

Shishkin wrote: "In the case of art - be it art, architecture, such practice is of the greatest importance. It alone allows the artist to appreciate the substance of the raw material which nature presents. Therefore, the study of nature is necessary for any artist, but especially for the landscape."

Shishkin knew as much about individual plant forms as did the professional botanists of his day. He probably would have agreed with the critic Adrian Prakhov, who said, "I love the original character of every tree, every bush, and every blade of grass, and as a loving son who values ​​each wrinkle on the face of his mother."

Shishkin said, "Work every day as if it is your daily duty. There's no need to wait for inspiration! Inspiration is the work itself!"
------
Thanks to Samir Rakhmanov for the link and the help with translation.
Previously on GJ: Using Photo Reference 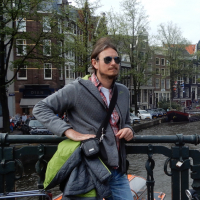